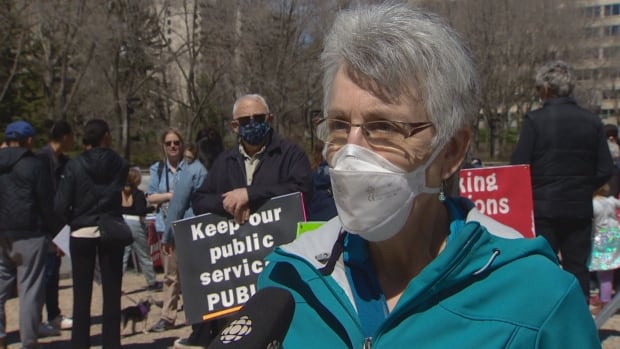 About 200 people came to a rally in support of nurses at the Alberta Legislative Building on Saturday afternoon. Similar rallies also took place in Calgary, Red Deer, Lethbridge and Medicine Hat.

Heather Smith, president of United Nurses of Alberta, said the event was held as part of National Nurses Week to thank nurses for their continued work throughout the pandemic.

But Smith said there were other reasons for the rallies as well – she worries about the increasing privatization and underfunding of public health care.

“What we need is the money and the political will to invest in public health care,” Smith said. “We need to move forward with things like pharmacare and real reforms to our long-term care system.”

Sue Reid, a retired anesthesiologist who worked in Edmonton for 30 years, said she came forward to honor nurses and also to defend “publicly funded and provided health care.”

Reid spoke at the rally as a member of Canadian Doctors for Medicare, a group that aims to improve publicly funded universal health care.

Earlier this year, the Alberta government proposed using public funds for surgeries at private clinics to clear up the backlog of surgeries.

“You’re stealing people from the public hospital system and putting them into the private system and there’s no surplus,” she said. “So if you are an anesthetist working in a private operating room [operating room]then the only public OR is closed.”

His concerns were echoed by Chad Ohman, Technical Producer at ProtectOurProvince Alberta.

“We see this with the privatization of Alberta Precision Laboratories to Dynalife,” Ohman said.

Dynalife Medical Labs was scheduled to take over the majority of community lab services on July 1, but the move was delayed until December 5 due to operational issues.

For Smith, these issues demonstrate a greater need for more public health funding from the provincial and federal governments.

She added that she would like federal government money to come with “strings attached” so it cannot be directed to private services.