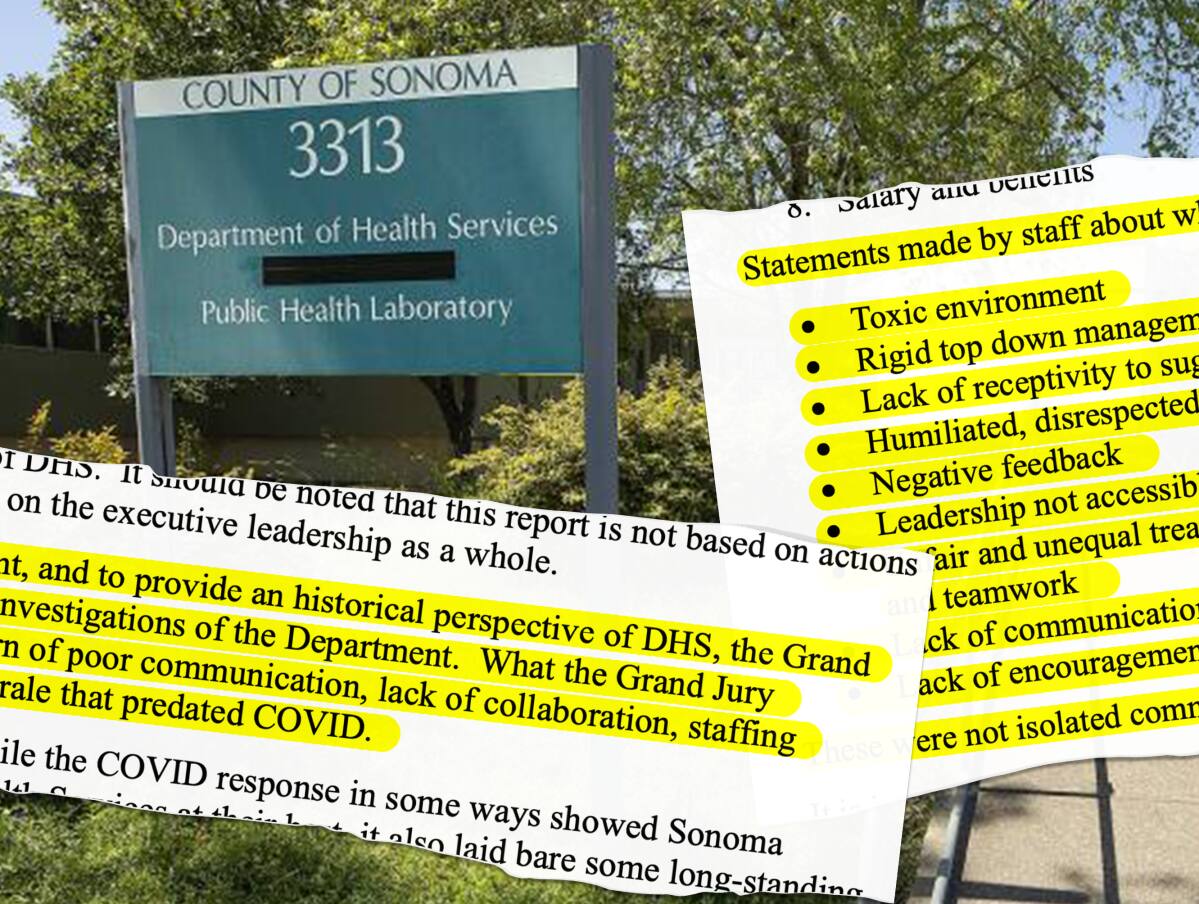 For the third time in six years, a Sonoma County civil grand jury has blasted the county’s Department of Health Services.

This time the topic was the ministry’s response to the pandemic.

In a section titled “Dedication overcame dysfunction,” the report, released in May, described what the jury members called “a long-term pattern of miscommunication, lack of collaboration, staffing issues and low employee morale that predated COVID” at the department.

Among other specific flaws, he calls DHS unprepared for the emerging health emergency due to staff vacancies, including the position of director of nursing. He also notes a power struggle between DHS and Office of Emergency Services leadership teams early in the pandemic, and cites DHS’s failure to meet FEMA’s financial requirements.

The report also alludes to a lack of responsiveness on the part of the ministry’s human resources office.

These shortcomings did not only affect staff well-being. They “disrupted the emergency response to COVID,” the grand jury wrote.

DHS Director Tina Rivera briefly addressed the report Thursday, pushing back on her characterization of his management style. She pointed out that she has only been director of health services since March.

She joined the county health department in January 2020 as deputy director and became acting director in May 2021, after then-director Barbie Robinson resigned for a job in Houston.

“I’ve built my entire career on collaboration and partnership, and I have an open door,” Rivera said. “It’s always open. I was really disappointed with some of the things I read.

This grand jury report came just as DHS was formulating its plan to cut COVID services. And while this strategy may be justified by the coronavirus moving into an endemic phase, it has also drawn complaints of miscommunication.

Previous grand juries have documented similar problems at the department.

The 2016-17 and 2017-18 juries both took a look at DHS and came to harsh conclusions about the department. The 2017-18 report stated that “…professional communication was stifled by a culture of retaliation and neglect that impacted the free flow of information. This has led to a glaring lack of transparency.

The review of this exercise was prompted by a citizen’s complaint asking the grand jury to investigate the county’s COVID-19 emergency response, as well as the overall leadership and organizational climate within DHS. The jury conducted at least 24 interviews with county officials, past and current DHS employees, and other county personnel who assisted in the COVID response, while reviewing hundreds of public and private documents.

Jury members found a lot to like about the entire COVID program. They praised the county’s emergency operations center for its rapid response to the pandemic, noted the collaborative approach of county health officer Dr. Sundari Mase (who reports to Rivera but has some powers that transcend traditional work structure) and lavished praise on rank and file workers.

“We found an abundance of dedicated county employees who performed admirably and heroically,” the report said. “…A number of people have contributed to an extraordinary level, working countless hours, sometimes without any additional pay, and with minimal public recognition.”

DHS management has not fared so well.

“From our interviews, a common theme emerged of a top-down leadership style characterized by what one interviewee called a ‘my way or the highway’ approach,” the grand jury report said. “Many interviewees said senior DHS leaders only want managers who agree with them, and that there is fear of retaliation if they don’t. … Respondents used adjectives such as ‘toxic’, ‘hostile’, ‘chaotic’, ‘dysfunctional’, ‘desperate’ and ‘frightening’ to characterize the resulting organizational climate. »

A future former DHS contract employee agreed with this assessment.

“There is such a leadership vacuum,” said the displaced worker, who requested anonymity for fear of reprisals as he searches for a new job.

One particular disruption cited by the grand jury was a power struggle early in the pandemic between Robinson and the county emergency operations center. The breakdown led to the county’s decision to have co-leaders in the overall COVID response, the report said. After two months, the strategy changed again and DHS was given ultimate authority.