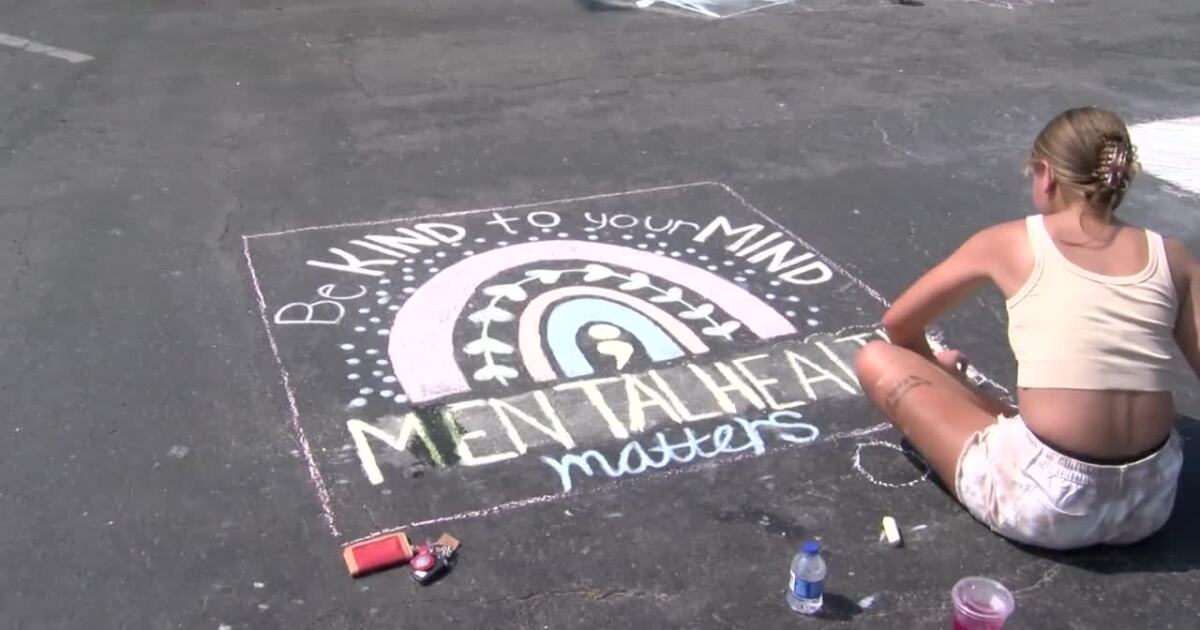 BEEVILLE, Texas – There is a need for more mental health services in Bee County and Kristina Cavzos was one of those who identified it. With a little help, she began collaborating to bring Chalking for Mental Health Awareness to Beeville.

“What we wanted to do for our community is we wanted to bring resources to the heart of Beeville,” said Cavazos, administrative assistant at Serenity Counseling Services. “If someone has mental health issues, we want to be able to provide them with where to go.”

“I think one of the hardest things about living in a rural community is accessing mental health services,” said Beeville Mayor Brian Watson. “There just aren’t many and we have a lot of people in need. So being able to close that gap is super important.”

Cierra Martin is someone who decided to leave a message in her chalk drawing, “Be kind to your mind.” Martin traveled from the University of Oklahoma to support Chalking for Mental Health Awareness in his hometown.

“When I heard about it, I was a little excited that they were doing something for mental health,” she said. “My brother is bipolar. So I’m really into raising awareness and reducing the stigma.

The event invited people to come and buy a 5 foot by 5 foot space to do a chalk drawing. Designs can be anything. They ranged from Spongebob Squarepants to messages of love and kindness. All in hopes of raising money to fund mental health services for county residents.

“It would mean a lot to me because I feel like things would have turned out very differently,” Martin said. “Just the way my brother was treated, if we had more mental health services here. And, I also know a lot of people who have struggled with that. And I feel for them because there’s no lots of resources out there right now.

Celicia Piersee and her family were also participants. She said she understood the importance of everyone having the ability to seek mental health services. His family came up with a concept to look like stained glass and incorporate themes from the movie “Inside Out.”

“I mean the community is our community. I would love for our family, that’s basically what it is, to have those options,” she said. “Where so many times it’s not because it’s not even not covered by insurance most of the time.”

Cavazos said he will continue to try to raise funds through donations on the Chalking for Mental Health Awareness Facebook page.

During the event, the organizers also held raffles and cash prizes were awarded to the best chalk drawings from several divisions. Singing performances were also featured by Corpus Christi natives David Kearney and Clarissa Serna. They appeared on “American Idol” and “The Voice” respectively.

California Creates New Health Information Exchange. How do we know if our personal data is safe?